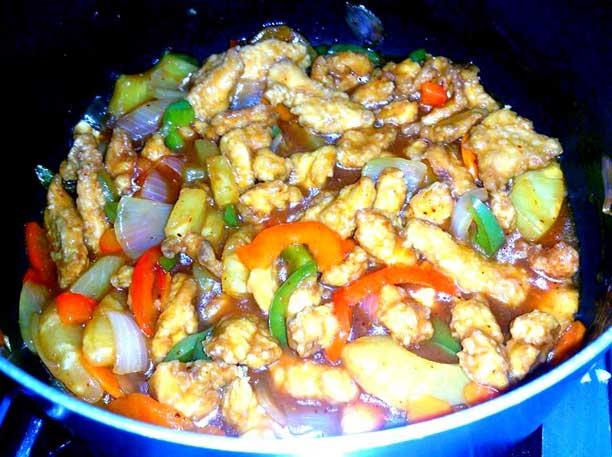 After a briani as dinner, I woke up the next morning with a craving for Chinese Food. Too lazy to go eat out, I checked ingredients I had and decided to make myself a Sweet & Sour Chicken dish with a spicy touch. So our nature, isn’t it? I never made this before because I always preferred the easiest way: Order. I googled a little bit, found Sweet&Sour Pork, Hong Kong Sweet&Sour, Sweet&Sour Dance Crew.. WTH! O.o

I decided to read all the articles, even the Dance Crew. Sexaaayyyyyyyy! ^_^ Then, I made my own Sweet & Sour Chicken with bits and pieces from everywhere.

• Slice the chicken breast as you wish: in cubes or in small flat fillets.
• Season the chicken pieces with 1 teaspoon of salt, a dash of pepper, ½ teaspoon of soy sauce and the beaten egg. Mix and leave to marinate for 30 minutes. I prefer to cover the bowl with cling film and put in the refrigerator to be kept cool.
• Remove the chicken pieces from marinade, dust with cornflour and deep fry until golden brown. Set aside on absorbent kitchen paper.
• Remove the seeds from the bell peppers and slice them not so finely else they will be chutneyed, lol.
• Drain the pineapple chunks from the juice and cut each chunk in three. Keep the juice!
• Blanch the veggies. See process in “How To” section below.
• Heat 1 tablespoon of oil in a pan, drop the blanched veggies, pineapple chunks and add in ½ teaspoon of soy sauce. Stir-fry for 5 minutes, tossing and turning. I love this part, really gives you the impression of being a Chef, with the shwiiiiissshhhhhhh sound. :-p

• Prepare the sauce: In a recipient, add all the ingredients listed for the sauce and for the canned pineapple, add the juice. Bring to boil on medium fire. Simmer and stir till thickened.
• Reduce fire, add in the veggies and chicken, and heat through. Taste to check salt though, if necessary add some more.
• Serve Sweet & Sour Chicken with hot fuming white rice, bon appetit!

No rice vinegar? No problem. Use white vinegar. As it is, rice vinegar is milder than white one, some might not like it. But it does add to the “Chinese” flavor of the dish.

Use of cayenne pepper

Okay, I have modified the recipe, as I mentioned. And I like my foods a bit spicy hence added this. You can skip it, original Sweet&Sour recipe does not have cayenne pepper in it anyway.

You can use non-processed pineapple too and for the juice, either bottled or fresh pineapple juice or simply use sugar and water. There might be other substitutes for pineapple as well, google (:

Khairah Published 08 Sep 2015
3
Hmm.. Risk-lover? Work to party kinda person? Crazy and spontaneous? Sheesh, nothing worthy to be put in a BIO! Let's see if I get wiser with age - then I might come edit this section :p

This is a premium community exclusive to our members to discuss all things Mauritius where some of the discussions have been made public but read-only for you to get a taste of what it's like on the inside. Membership is £2.99 (approx. Rs135) for 30 days access, collected through Paypal and can be subsequently renewed or cancelled as you see fit.
1307 members . 1838 topics . 5966 posts
Join Community

It would be nice to know the cooking duration to have an idea how long one should allow for to do this.

If I wanted to make that with tofu instead of chicken, how would I prepare the tofu?

• Tofu: Slice the tofu and deep fry. When the color turns light to medium brown, remove and set aside. Add to sauce at the same point where I added the veggies.

This looks delicious. Will make sure to try this soon :D Thank you for sharing.

Merci (: Do share how yours turns out to be!

gu
4 replies
253 views
After eating something sweet and then drinking sweetened tea, why is it bland?

sw
2 replies
100 views
Do we have mauritian participating in the #cnschallenge on TikTok?