The nasty gecko and the dishonest electrician

I woke up on a Wednesday morning and as always, I pushed the power button on my remote to switch on the TV but it wouldn’t turn on. I thought I didn’t plug the TV in but after checking all the cables and trying to manually switch it on from the appliance itself, I concluded it was an internal problem. So I looked for all information and solutions I could gather on the Internet to fix it but none worked.

As I’m a bit of a DIY person, I dismantle the unit and to my utter dismay, I found a gecko dead on the power circuit. 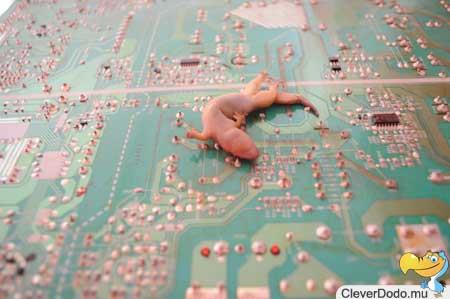 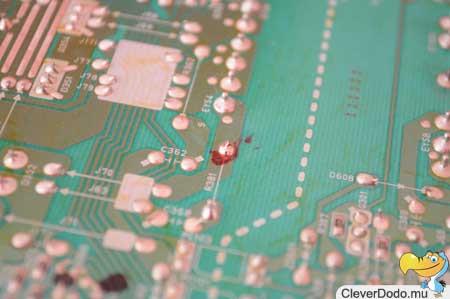 It is a 50 inch LG plasma TV which I brought from the UK when I moved here and when I called Dragon Electronics to see if they could repair it, they said they do not service that particular model. I’m not an expert at electronics but I can manage small jobs. So with the help of my multimeter, I tried to locate the problem but there were no obvious signs of damage (no burnt signs, no bad capacitors) and I knew then I’d have to get the opinion of a specialist electrician.

So my neighbour recommended someone who lived on the road behind us and when he came over, I showed him the TV which was already opened and told him that the power supply was faulty. He said he would have to take the TV set to his workplace to diagnose the problem and I asked him how much it would cost me and how long it would take. He said 3 days to find the problem and the cost would depend on which part needs replacing. So I asked how much I needed to pay if he was unable to fix it and he replied “I will not take any money from you if I’m unable to repair it”. Everything sounded great and he came round the next morning to pick up the TV.

Couple of days later, I didn’t hear anything from him and I was very eager to know what was happening. So I called him and he said unfortunately it is taking a bit longer than he thought and he needed a bit more time (couple more days). I didn’t have any choice and waited. When again he didn’t call me when he was supposed to, I contacted him and he said a colleague of him was taking care of the TV and they were waiting for a component to replace on the power circuit and as soon as that was done, he would let me know.

Well after 10 days, I thought enough was enough and called him for an update. He then told me he didn’t phone me up because he wanted to do that when he had some good news. I said I’m willing to wait 3 more days but if after that time you’re unable to repair my TV, then I’d like to have my TV back. So after waiting 2 weeks ( yep I survived 14 days without TV!) he called me to say he was returning my TV the following day as he needs more time to find the fault and I was in too much of a hurry. He also asked me to give Rs1000 to his colleague for the time spent. I told him “yeah, whatever”, just bring back my TV.

When I got my TV, I asked him what he thought the problem was and he was like “well don’t really know as we didn’t have enough time”. So I told him that before he took my TV, he told me I will not have to pay him anything if he couldn’t repair it and he was like “yeah, but I didn’t know it would take so much of our time” and I was like “that’s not my problem, and you made me wait 2 weeks and still you cannot tell me anything I didn’t know before and you expect me to pay you?”, “I told you there’s a problem with the power circuit before you took the TV and you’re telling me the same thing and I need to pay you for that?”, so he was like “well there’s the transport cost as well” and at that point I knew he was a dishonest person who wanted to make some quick cash without doing any real work. He lives behind my house and took the TV to his workplace, so it’s not like he even had to go out of his way. And I was more than willing to get the TV where he wanted to in my own car.

So I lost 2 weeks when I could have easily ordered a new circuit from abroad to replace the power supply. Of course there’s a 50/50 chance that it will not work because other boards may have been affected by the short circuit but it would have saved me from unnecessary frustration.

If that were you, would you have paid the electrician?

Update The TV part I ordered from UK arrived in Mauritius within a week (Royal Mail Internationally tracked package) but it took another 4 days to receive a yellow card informing me it was held by customs and that I should go collect it at the Parcel Office. On top of the Rs3200 I paid for the part (circuit + shipping), I had to pay another Rs131 to get my TV part. The circuit came into an anti-static bubble wrap and you could easily see it was an electrical part but I had to keep on telling customs they may damage the part if they touch it with their bare hands. Fortunately, it was a girl customs officer who had more sense than her male helper.

Anyway, the part did not fix my TV because there was a short circuit somewhere else and I decided to buy another TV instead of wasting more time and money with this.

gices Published 19 Aug 2013
3
Gices Abraham is the founder of Clever Dodo. He's a life coach and advocates the practice of MAM (Movement/Arts/Meditation) for a well-balanced and happy life. Born in Mauritius and now living in the UK, he usually blogs about fitness, music, spirituality and driving topics to pass on his knowledge.

This is a premium community exclusive to our members to discuss all things Mauritius where some of the discussions have been made public but read-only for you to get a taste of what it's like on the inside. Membership is £2.99 (approx. Rs135) for 30 days access, collected through Paypal and can be renewed or cancelled as you see fit.
1307 members . 1838 topics . 5966 posts
Join Community
gr
grasslizard 16 Sep 2013

I had the same issue but a happier outcome. Gecko fried on the power supply board - TV is a Samsung from the UK. Ordered a spare PCB (about Rs1000 including delivery) and swapped out the old one.

It can be an easy problem to fix but I guess you need a bit of luck!

I was hoping replacing the power circuit would fix my problem but unfortunately some other unit has been damaged. I'm glad your experience was better than mine though :)

Are you from the UK?

Yes I am from the UK. I bought the replacement board from these guys: http://tvpartsfixit.co.uk/

The gecko was properly fried. First I took the board out and scrubbed the lizard remains off with an old toothbrush (nice!). It actually worked for a few days after this but then died completely.

No way I would have paid him. A few years ago Dad wanted to get the old TV repaired so he sent it to an electrician (who happened to be a friend of his). That guy called my dad after 4 weeks to tell him that he couldn't do much but did change 1 small part in it - TV was on but there was still a problem with the image. He asked my dad to come take the TV, but he was charging a rather exorbitant price (don't quite remember); Dad just told him "if it's like that then keep the TV!" and he slammed the phone. Few days later the technician came to return the TV himself, and charged only a really small amount at the end!

Ah, most of the time, friends and family put you in a really awkward position when they either overcharge you or do a really bad job and you don't want to tell them off just to not jeopardise your relationship with them. I tend to stay away from them and take on strangers instead.

Yep, and when something like that happens, you realise how much you rely on TV for entertainment. On a brighter side, I got to do more work done, read books which were just sitting on my shelf and finally found time to play my guitar :)

0 replies
2K views
What kind of course can I take in Mauritius to get a job in Canada?

3 replies
177 views
What is the lifespan of a Mauritius Parakeet?