Why don't Mauritians know about the BROAD-BILLED PARROT; Perroquet bleu, an extinct endemic species of bird, as opposed to the dodo? 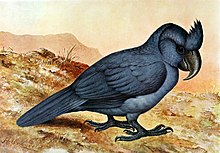 The broad-billed parrot or raven parrot (Lophopsittacus mauritianus) is a large extinct parrot in the family Psittacidae. It was endemic to Mauritius. It is unclear what other species it is most closely related to, but it has been classified as a member of the tribe Psittaculini, along with other Mascarene parrots.

The broad-billed parrot's head was large in proportion to its body, and there was a distinct crest of feathers on the front of the head. The bird had a very large beak, comparable in size to that of the hyacinth macaw (Anodorhynchus hyacinthinus), which would have enabled it to crack hard seeds. Subfossil bones indicate that the species exhibited greater sexual dimorphism in overall size and head size than any living parrot. The exact colouration is unknown, but a contemporary description indicates that it had multiple colours, including a blue head, and perhaps a red body and beak. It is believed to have been a weak flier, but not flightless.

The broad-billed parrot was first referred to as the "Indian raven" in Dutch ships' journals from 1598 onwards. Only a few brief contemporary descriptions and three depictions are known. It was first scientifically described from a subfossil mandible in 1866, but this was not linked to the old accounts until the rediscovery of a detailed 1601 sketch from the Gelderland’s ship jourmal that matched old descriptions. It also appeared as one of the animals of Mauritius (No. 5) in a woodcut from the same period.

The bird became extinct in the 17th century owing to a combination of deforestation, predation by introduced invasive species, and probably hunting as well. A lower mandible of tremendous value has been discovered during the last surveys at Mare aux Songes.

There are many other animal species which have been brought to extinction in Mauritius as well as other countries. I a book a few months ago which talked about other species which disappeared as soon as humans got involved, I vaguely recall the animals but the two countries I remembered were Australia and South America. The book is called Sapiens: A brief history of Humankind. It's a great read, so do check it out.

Now the reason why the dodo is more popular is because it was clearer to see the the magnitude of the devastating effects. Mauritius was an uninhabited island and everything was going fine until the first humans landed. It took us just 80 years to wipe them out despite the fact they had been living on the island for thousands and thousands of years.

As this happened quite recently in historical terms, we were able to gather data around this. Sailors wrote and talked about the dodo with their peers when they got back home. By studying the factual information, people were able to understand how we destroyed a whole species within short a short amount of time. With other species from other countries, there's not so much information available to draw statistics, hence the dodo serves as example of human destructive power.

Thank you. The entrance of the history museum talks deeply about the extinct species but I didn't have enough time to read everything.

Is the history museum the one in jardin compagnie?

yes. It just opened after 2 years of renovation

The Valley of Ferney Mauritius

2 replies
3.4K views
Why do Mauritians think that Cannabis/Marijuana is bad, despite it is safe and kills none?

0 replies
93 views
What makes the dodo bird so special and would happen if they never went extinct?