Since MBC have started the programme Shani Dev on MBC Digital 4, many people have come to know about the god of justice Shani. Although there are many other gods to choose from, Shani is also just as important. Surprisingly there is only one Shani temple in the whole of Mauritius; it is located in the south of the island in a place called Rose Belle.

If you are coming from the north then make your way down south and follow signs to Rose Belle. Once you have entered Rose Belle, there will be a TFP (the furniture people) around five minutes into the journey; turn left after the building. If you are quick enough, you will also see a painted sign for Ganga Yamuna Dhaam on the road that you need to turn into. It is a very small and narrow road that is sometimes congested but this is the road you need to take to go to the temple. About half way down the road there is a bridge that was inaugurated 18th April 2012 to help people who want to visit the temple with a more accessible point where they can continue their journey. You need to continue a little further to reach the temple, don’t worry it’s easy to find as it's at the very end of the road. 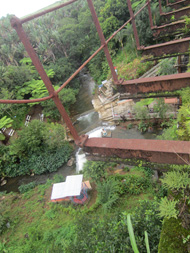 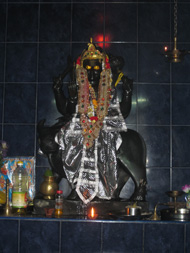 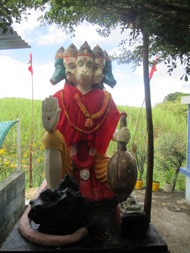 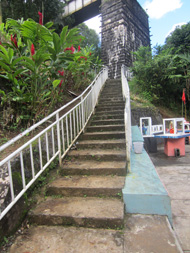 When you arrive, there is small area that you can park your car and then there is a bridge that connects you to the entrance of the temple. The view from the bridge to the river below and surrounding areas is just beautiful; we visited on a Wednesday afternoon and were lucky enough to be the only ones there. When you cross the bridge, there is a small building that says Maha Lakshmi Vidya Bhawan and it is used as a multi functional hall for prayers, yoga, educational classes and small weddings. In one of the small rooms, you will find Shani, you are free to pray and light a candle if you wish but offering mustard oil is done on Saturdays so you will not be able to pour it on his body but leave it as an offering if done on any other day than Saturday.

There is a lovely local lady that is usually at the temple for a few hours each day; she educated us a little bit on the gods. There are 108 steps from the top of the temple to the river at the bottom, the gods that are found outside of the Shani temple are also at the bottom of the steps, and they are just smaller than the ones at the top. There are so many to mention but some that I remember are Ganesh, Shiva, Hanuman, Krishna and Kali.

After seeing the gods at the top of the temple, make your way down the steps to the bottom; the sound of the river is so serene especially as we were the only ones there. There are two more gods one of them being Kali that is situated across from the river, when the current is not so strong you can walk across to worship them but when we went it was not possible.

It was a nice day out and the plants and trees were really a spectacular sight to see. It was a little cold so I would advise a cardigan and maybe an umbrella as Rose Belle is known for cooler temperatures and rain. You might want to visit the market that they have on Wednesdays and Saturdays or finish off your day with a visit to Grand Bassin which isn’t very far from there. We were there for a few hours taking pictures and visiting the gods, the area is also known as Madame Lolo River.

The location of the temple is superb. The greenery all around and the sound of the water flowing from the river provides such a warm welcome for those who are visiting the place or going to pray.

pa
2 replies
1.4K views
Are there porcupines in Mauritius?

2 replies
665 views
Does anyone know of any yoga classes in the Quatre-Bornes area?
BG

4 replies
1.8K views
Where exactly is PanchMukhi Hanuman Temple? please guide me how to move from La louise, I have my car

3 replies
497 views
Apart from the places listed on net for tourist, please let me know other places of interest in mauritius?